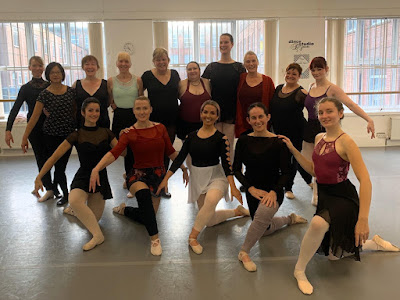 Not my words but Sarah Lambert's and I would not disagree with her.  Nor would I disagree with Sophie who described Saturday's company class as "fabulous". Amelia said it was "enjoyable" and that she thoroughly enjoyed herself.  Elaine called the class "amazing" and added that she had no words for how good she was feeling.  That is what I like to hear.

It was all made possible because we had a first-class ballet mistress.  Elizabeth Rae has danced leading roles with the Frankfurt Ballet and many other companies. She has also taught at San Francisco, Oakland, Elmhurst and the Royal Ballet School of which he is an alumna.

From the start she treated us as artists and not just adult ballet students even though that is what we are, Every exercise had a refinement such as a weight change in the pliés and a retirés and turns in the tendus and glissés.  Corrections were incisive and comprehensive and always kindly.  In every exercise, she coaxed us to do our best and then some.

Elizabeth gave us a very thorough barre before she called us to the centre.  For each of those exercises, she arranged us in lines.  The first was little more than relevés in first and second but they became progressively harder.  Next, she gave us a beautiful adagio which included some développés, balancés and gentle turns.  We had a short session on pirouettes.  Christine did enough to power a small town or even charge a Tesla had she been connected to a dynamo.

The last part of the class consisted of warm-up jumps, petits, medium and grands allegros which are always the best part of any class. We leapt and ran and threw our arms into open 5th at the very end. Before I had even left the room I was asked when Elizabeth was coming back. I am delighted to say that she has agreed in principle to be our rehearsal director.

Our next company class will be in Liverpool on 30 Nov between 14:00 and 15:30 with Mark Hindley, The venue will probably be the dance studio (Performance 2 and 3) at St John Bosco Arts College. I have made an online booking and offered them some dosh.  Their website states that they reply within 48 hours.

Later this year, Jane Tucker has promised us a repertoire class from The Nutcracker which we hope to include with polish into a performance piece together with Morning and Aria.  I have been in touch with Terence about bringing him back for a workshop and as we are still in the EU for a little bit longer I shall try to bring Yvonne back to these shores.
Labels: company class Elizabeth Rae Jane Tucker Leeds Mark Hindle rehearsal director St John Bosco Arts Collehe Terence Etheridge